Hey everyone! Been a few days since I've updated anything here but I do have several things lined up including updates to the 2003 page with more shows in FLAC and I may try to upload EV's Bridge set in DVD format to megaupload. I think it's a manageable size to work with as far as DVDs go. As many of you probably know his set from 10/22/2011 was webcast so the DVD is pretty nice. We'll see how it works. And while you wait for that you can watch the entire thing on Youtube. What would we do without Youtube?! Links to download the audio in FLAC and MP3 formats are below the video. Enjoy!

SETLIST
1. Don't Cry No Tears (stopped)
2. You've Got To Hide Your Love Away
3. Don't Cry No Tears
4. Rise
5. Without You
6. Tonight You Belong To Me (with Regine Chassagne from Arcade Fire)
7. Just Breathe
8. Porch
9. Sleepless Nights (with Beck)

So I decided to try something new recently. I figured, "I have all these bootlegs, why not actually listen to a few here and there?" And then " why not write something about the ones you listen too?" Grand idea.

Then the task was choosing a bootleg to listen too out of the hundreds of shows. How do i do that? So I just decided that since I'm in the midst of uploading all of the shows from 1996 and 2003 to just choose one of those while i get it uploaded and throw some remarks out there about the show and the recording. I'll do my best to judge the quality of the recording because I do realize that not everyone will want to download EVERY show like I just HAD to do :) Maybe a review will help you decide.

So the first show I chose, sort of at random, is Hamburg, Germany 11/04/1996. This was the show the night after the widely talked about and circulated Berlin show which was broadcast on FM radio. Personally, although the quality of the Berlin recording is very good, I've always felt there was something missing from the feel of that show. I think it's almost over hyped because it's an FM broadcast. If you're into collecting and listening to bootlegs you know there's much more to a good show than just the quality of the sound. Not to belittle the importance of sound quality but there has to be a certain FEEL or emotion to a recording as well to make it a truly great bootleg.

Okay, so Hamburg 1996. Yesterday morning I was out mowing lawns and got this show queued up on my iPhone. A quick look at the setlist and things look pretty interesting right off the bat with a "Wash" opener. A couple more songs into the set and I'm beginning to really feel this show. "Last Exit" gets my blood flowing followed by a very powerful "Animal". Getting further and further into teh opening set and I'm finding myself really paying attention to this show. Sometimes a show can just be background music when you're in the middle of something else and you're not really hearing yet but this show grabbed my attention all the way through. More highlights in teh opening set are "Betterman" with "Save It For Later" tag, "Black" with an excellent solo, and a blistering "Alive" to close out the main set. Mike just absolutely is given to wail and that song. Still, after 20 years, get chills almost every time I hear that song but this one stood out.

One of the things that really makes this a better show than the Berlin show is just the wway it seems to flow better. I felt like the Berlin gig just kind of plodded along where as this one just keeps momentum from start to finish. In this sense I would compare this show to some of the more current shows in the mid to late 2000's to current where the sets are just very well crafted and keep the pace throughout the evening. Ed has become exceptional at putting a set together.

The encore is just as kick ass as the main set. Opening with a beautiful version of "Off He Goes" and then starting to slam it home with a raging "Not For You". They close it all out with "Smile" and "Rockin' In The Free World".

This is a very solid audience recording. My own personal rating would be B+/A-. It's got a very consistent sound all the way through. The volume doesn't fade in and out at all. I've listened to this show in a few different places including, as already mentioned, on the iPhone, in my car, and in my wife's car. The sound definitely varies a bit with the system you're listening on. I noticed in my wife's car that the treble seemed a bit high. Jack's high hat was a little much but a quick adjustment to treble and bass and it was back to solid. You can find source info for this show here.

I've really come to admire a good audience recording of a show. If you get a good one you know it immediately. It takes you, virtually, inside that arena in the middle of that crowd. You can close your eyes and smell the sweat, the smoke of a cigarette, and feel the kick drum in your chest. No matter how good a soundboard recording you're not going to ever get that same feel in my most humble opinion.

So thanks to the taper for an excellent recording of an excellent show. Thank you for standing so still for 120 minutes and not singing into the mic :) And thank you for sharing with a community that just eats this shit up. Thanks to you and all those that record shows for our ears to hear and our souls to feel.

You can get the Hamburg '96 show on the 1996 page in both FLAC and MP3 formats. I highly recommend it. Sit back with a set of headphones and journey back to Germany 1996 and soak up the No Code tour in all it's glory! 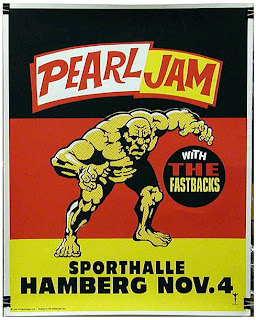 The 2005 page is done for the most part. All fresh links have been added and the layout is all set. I still have to get the Pittsburgh show which was not an official bootleg release. I think they opened for the Stones or something that night and I know I have and audience recording of it some place but haven't been able to locate it yet.

I've probably mentioned it before but this is one of my favorite tours to listen too. I really can't think of a bad show from this round of bootlegs. Lots of great set lists and really mixing it up quite a bit. Enjoy the shows! The '03 tour is up next so get your hard drives ready for more FLAC files!

One of the best songs played on the '05 tour: