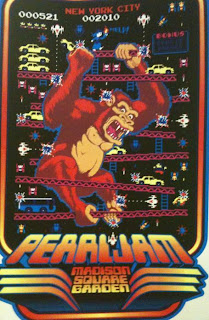 On Friday 5/21/2010 my brother and I made the journey from the Philadelphia area to NYC to see Pearl Jam at Madison Square Garden. We took the train from Hamilton, NJ to Penn Station and walked the rest of our time in the city.

On our short walk from the train station to the hotel we scoped out a few places we might want to hang before the show. A place called O'Reilly's on 31st street looked like a cool spot and we would keep that one in mind.

We checked into the hotel and chilled out for a bit there before heading out for some food and refreshments for the pre-show. I never really knew it before but found out that my brother LOVES hotels! Probably would have stayed there all night! It was close to 5:00 PM I think when we decided to venture out into the enormous city and locate some suds and fine bar cuisine.

we strolled back the way we had come and thought we'd cruise by that O'Reilly's joint we saw earlier to see what it might offer. Well when we got to the front of the place we knew we would probably be staying here for a while... 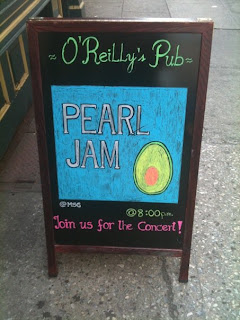 Not only did they have the best sign on the streets of New York but when we walked in the place they had Touring Band 200 playing on the TV's in the bar area. Nice! We stayed. We had a few beers and some great grub and got ready for the show.

I guess it was about 7:30 when we decided to head to the Garden and get to our seats. The building was absolutely electric! You could just tell people were excited to be there. In New York. At a Pearl Jam show. It was great feeling!

My brother and I were both really hoping to see them open with "Release". I had never seen them open with that song and for him it had been since '98 I believe when he saw them in DC for one the Voters For Choice shows.

Well, it was not to be. They came out swinging with "Corduroy" on this night but looking back on it I certainly did not feel disappointment. After all, the opening line to the song was just so fitting... "The waiting drove me mad... Your finally here and I'm a mess..." because I was so excited for this show it was hard for me to focus on anything for the entire week leading up to it. From that opening song on through the entire night we simply witnessed magic all around us. The band was really into it and was feeding off a crowd that grew louder and louder as the night progressed. The band delivered a really diverse set of songs from hits like "Black", "Alive", and "The Fixer" to the tracks that most casual fans would recognize as Pearl Jam including "Sweet Lew",  "Black, Red, Yellow" and "Push Me, Pull Me".

A couple of the finest moments ever at a Pearl Jam concert came in the later parts of the show and these are the moments that I will remember forever.
"Hunger Strike" with Ben from Band of Horses:


And "Lukin II"... a slowed down version of the normally punk infused classic! This was really awesome.


My brother and I had a great, great time at the show and enjoyed our time together in a great city! He even made us shirts for the occasion. I left mine in the car at the train station and he left his in his bag that he left on the train on the way home :) Hopefully he got it back. I haven't heard yet :) 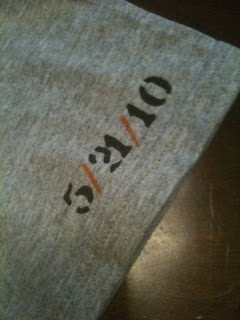 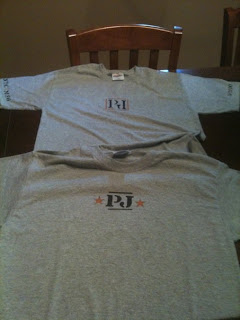 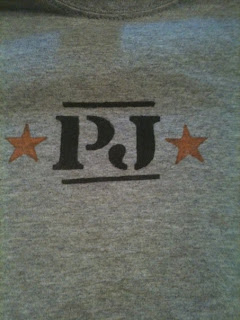 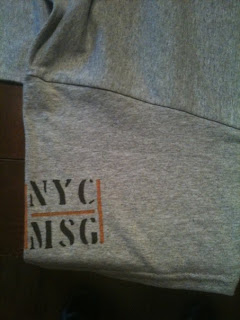 Regardless of few minor mishaps... nothing could ruin a night like that. Pure Pearl Jam magic. Can't wait to hear the official bootleg!
Posted by Andy at 3:20 AM 4 comments:

Posted using ShareThis
Posted by Andy at 1:17 AM No comments:

Each week seems to get better and better for soccer this year. Josie started off slow the first week or so but she's starting to get into now. Even though most of the time one really wouldn't call what she's doing soccer. One things for sure. She's having fun and we are getting some laughs out of it :)

Here she is during Sunday's game. A little behind the play but better late than never :)

Another one from Sunday's game. No real soccer in this one either but quite a little dance :)

Good times and just great to be outside on a beautiful Sunday!

Cara took the kids to the Please Touch Museum on Monday. Hope to have some pics from that up soon. Josie and Lily both had a great time from what I've heard :)
Posted by Andy at 3:15 AM 1 comment:

Another update has been added to the 1991 bootleg section. The Seattle, WA show from 8/23 is now available in SHN format. Enjoy!

08/23/91 – Mural Amphitheater: Seattle, WA [50m]
attendance: 4,000
set: Once, State of Love and Trust, Even Flow, (Outshined)/Garden, Alive, Black, Deep, Why Go, Porch, Breath
notes: This free, outdoor show was also Dave Abbruzzese’s first concert drumming with PJ and the last show of the summer ‘91 Sounds of Seattle concert series (later called “Pain in the Grass”). As an intro to ‘Porch,’ Ed says, “This song is about if you love someone, tell him.” Ed climbs the speaker stacks during ‘Porch’ and glances over his shoulder at the Space Needle. Ed takes Jeff’s basketball from behind the speakers and throws it playfully into the crowd. The ball makes its way back to the stage during ‘Breath.’ The seldom played ‘Breath’ is wonderful.
Posted by Andy at 11:08 AM No comments:

The 1991 bootleg section has been updated with the 7/13 show at the Marquee Ball in NYC! Enjoy the show!

07/13/91 – The Marquee Room: New York, NY [45m]
supporting: Rev. Horton Heat, Afghan Whigs, Gorilla, Beasts of Bourbon, Codeine
set: Wash, Once, Even Flow, State of Love and Trust, Alive, Garden, Deep, Why Go, Porch
notes: This is a musically powerful show with Mike showcasing his guitar prowess. Ed seems in a cocky mood, making pointed wisecracks between nearly every song. (”Let me show you guys the industry handshake. ‘Oh, hi. Nice to meet you. Oh, ah, yes it was a pleasure. Sorry … I see Slash.’”) He jokes about ‘Even Flow,’ saying, “How many times we played this, once or twice? Wait, there’s industry people here. We don’t wanna fuck up.” After ‘Alive,’ he quips, “OK, let’s start getting into it. All the industry guys left. This, being PJ’s first NYC show, Ed proclaims, “Hey, mama. I played New York City.” 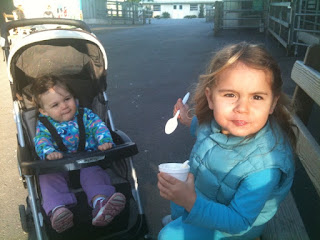 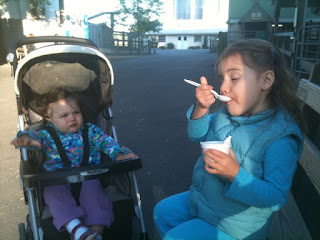 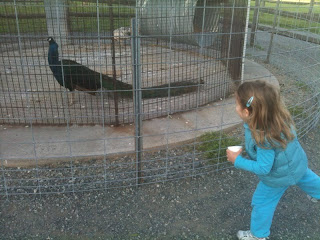 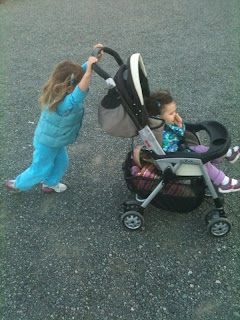 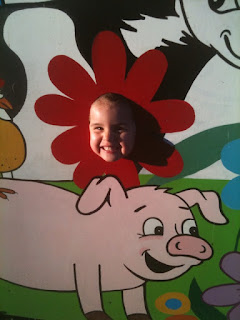 Ice cream on a cool breazy May evening with my two little sweeties!
Gave mommy a little "downtime" from the kids and the girls got some
fresh air and ice cream. Well Lil' just had a little taste and then
didn't want anymore but she's eyeing up Josie's in one of these shots :)
Posted by Andy at 3:10 AM No comments: 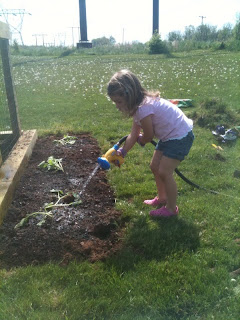 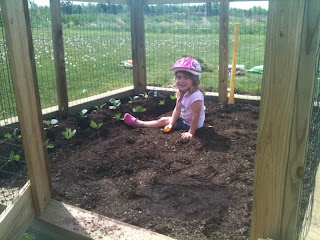 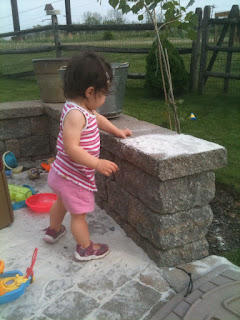 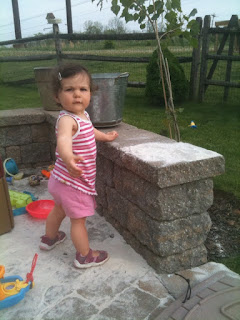 Josie and Lily having some in the yard and garden.
Posted by Andy at 2:19 PM 1 comment:

Four days in late October of 2009, Pearl Jam played the last shows at the historic Spectrum in Philadelphia.  Those shows are now available through Pearl Jam's Ten Club in three formats: MP3, FLAC and CD.
A limited edition box set of all four shows (9 CDs) is now available for pre-order.  Cost is $60, free shipping in the U.S.  These boxes will  begin shipping around May 18.  (Note: empty box not available for this item.)
Also available for pre-order is the 2009 complete box set.  32 shows, 65 discs in an AMAZING box set.  This set will be $395 with free shipping in the U.S.  (Note: this box will also be sold as an empty box, but the Philadelphia shows will need to be purchased as a box set to fit into this box)