The 1994 bootleg section has been updated with both of the St. Louis shows, 3/14/1994 and 3/15/1994. Both shows are available in both FLAC and MP3 formats. Setlist and show notes provided by Two Feet Thick are below. Enjoy the music!! 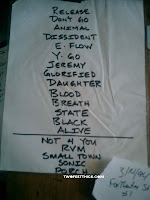 03/14/94 - Fox Theater: St. Louis, MO [100m]
support act: The Frogs and Grant Lee Buffalo
set: Release, Go, Animal, Dissident, Even Flow, Why Go, Jeremy, improv, Glorified G, Daughter/(Beginning to See the Light)/(WMA), Blood, jam, Breath, State of Love and Trust, Black, Alive
enc: Not For You, Rearviewmirror, Elderly Woman, Porch
notes: Ed joins The Frogs during their set for 'I Only Play for Money.' The improv is sung by Ed with very quiet music being played by the band, and is tagged with lyrics from The Beatles' somewhat obscure single, 'You Know My Name.' At one point, Ed's legs become so wrapped up in the mic cord that Jeff and Stone have to rescue him. Ed introduces 'Blood' as, "Spelled backwards, this song is doolb." The jam following 'Blood' is instrumental and 'Breath' is very different, ending with a cool jam. During 'Porch,' Ed marks up the band members' faces with a burnt cork. 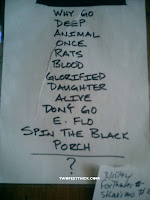 03/15/94 - Fox Theater: St. Louis, MO [100m]
support act: The Frogs
set: Why Go, Deep, Animal, Once, Rats, Blood, Glorified G, Daughter/(The Real Me), Alive, Go, Even Flow, Spin the Black Circle, Porch/Beginning to See the Light, Corduroy, Rearviewmirror, Black, Leash/Improv, I'm One, Baba O'Riley
notes: Ed joins The Frogs during their set: they start 'Jeremy' and Ed is lowered by a rope or cable onto the stage like he's flying, wearing the gold bat wings. He picks up a microphone and joins in. He also contributes to 'I Only Play for Money' and one other song, plus 'I'm One' (just Ed and Dennis).Lively, fun performance with Ed very animated and venturing to the edge of the stage to touch the audience as early as the second song. He does an airplane spin with one of the fans. 'Go' is dedicated to Kurt Cobain and 'Corduroy' is premiered. After assisting Dave on drums during 'Porch,' Ed gives one of the band's tall, white candles to the crowd, saying he wants to see how far back it will make it. To his enjoyment, the candle is passed to the back of the audience successfully while the band plays a snippet of the Velvet Underground's 'Beginning to See the Light.' Three Who songs are played tonight ('The Real Me', 'I'm One' and 'Baba O'Riley'). Cool show in a beautiful venue, which Ed acknowledges twice.
Posted by Andy at 4:33 PM 3 comments:

The 1994 bootleg section has been updated with the March 13th show in Chicago! The show is available in both FLAC and MP3. Two Feet Thick notes are provided below:

03/13/94 - New Regal Theater: Chicago, IL [140m]
attendance: 2,500
support act: The Frogs, Magic Slim and the Teardrops
set: Oceans, Go, Last Exit, Once, Even Flow, Rats, State of Love and Trust, Breath, Glorified G, Daughter/(You're in My Body improv)/(WMA), Animal, Not for You, Elderly Woman, Alive, Improv (I'm All Alone), Spin the Black Circle
enc 1: Hard to Imagine, Yellow Ledbetter, Rearviewmirror, Alone, Black/instrumental jam/Porch/(Tearing)
enc 2: Angel
notes: Ed joins The Frogs in 'I Only Play for Money.' Suffering from a cold and clutching a Kleenex box, he advises, "Don't drink when you're sick ... and don't get sick when you drink. Advice for the kids." He introduces 'Animal' as it being about Jeff "taking on the Chicago Bulls." During 'Porch,' he climbs up to the balcony (of this ornate old theater and takes a flying leap. The crowd seems to instantly envelop him, then back away a little bit and he's laying on the floor in the aisle completely limp. The is jamming along not even really watching, but when he doesn't immediately get up, Jeff gets a really concerned look on his face and scans the crowd for a sign of Ed. Eventually, two security guys go into the crowd and grab Ed, who is still limp, and literally drag him back to the stage, depositing him in a pile behind the mic stand. Everyone is going nuts and after about 60 tense seconds of Ed laying in a heap, he begins to move, swaying to the groove. He gets to his knees grooving; unsteadily to his feet, grooving, hair a pulsating mass. And them wham! "Hear my name, take a good look," and the capacity crowd literally roars in unison. As an encore, he returns on a skateboard with Dave, who accompanies him on guitar on the rarely played 'Angel,' closing the show.
Posted by Andy at 10:43 AM No comments:

The 1994 bootleg section has been updated with the 3/7 Denver show and the 3/9 Pensacola show. Both shows are available in FLAC and MP3 formats! Enjoy!!
03/07/94 - Paramount Theater: Denver, CO [100m]
attendance: 2,000
support act: The Frogs
set: Oceans, Go, Animal, Breath, Why Go, Blood, Garden, Not for You, Rearviewmirror, Why Go, Jeremy, Alive, (Sick o' Pussies)/Porch/(WMA), Spin the Black Circle, Glorified G, Daughter/(Rats)/(jam), Street Fightin' Man, Rockin' in the Free World, Indifference
notes: 'Spin the Black Circle' and 'Not for You' premier. During 'Blood,' Jeff jumps on top of Dave's kickdrum. Ed gives a short speech before 'Not for You' hinting that he wrote it after receiving mail from a convicted rapist saying how great the band was, and he talks briefly about David Gunn before 'Alive.' Mike smashes his guitar after 'Porch.' A mean version of 'Rats' follows 'Daughter.' Stone(?) notes, "We've never played this one in its entirety, but we're gonna try tonight," leading to a 11+ minute cover/jam of 'Street Fightin' Man.' Ed picks up some sticks during the end and drums a bit. Reportedly, Stone's baggy shorts fall and remain at his ankles as he's shredding rhythms. Mike is facing Stone, just ripping. Ed comes from the side and proceeds to wrap Mike in duct tape from his knees down. They continue to jam and Mike decides to lie down on the stage while a roadie pulls Mike's pants down. Mike goes after Jeff, lifting him off the ground via his BVD waistband. Ed dons a Bill Clinton mask!
> 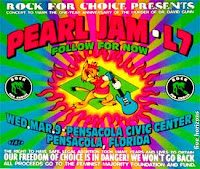 03/09/94 - Civic Center: Pensacola, FL (Rock for Choice Benefit) [90m]
attendance: 8,000
support act: L7 and Follow For Now
set: I Won't Back Down, Go, Animal, Even Flow, Dissident, State of Love and Trust, Glorified G, Daughter/(WMA), Blood, Why Go, Jeremy, Black, Alive
enc 1: David Gunn Jr. speech, Rearviewmirror, Elderly Woman, Porch/(Tearing)
enc 2: Indifference
notes: PJ reportedly received death threats prior to this performance. Ed starts the show off with a solo cover of Tom Petty's 'I Won't Back Down,' commenting "You know why we're here." Ed discusses pro-choice a bit, ending with, "... all these men trying to control women's bodies are really beginning to piss me off ... they're not in touch with what's real. Well, I'm fucking mean and I'm ugly and my name is reality." This benefit occurred one day prior to the one-year anniversary of the day Dr. David Gunn was shot outside a women's clinic. His son spoke: "You all have the voice. We are the majority. We have the power to take our country back (and to defeat those who) want to take our choices away from us."
Posted by Andy at 9:35 AM No comments: